Again, for me one of the most interesting applications of AR/VR is training. See also Virtual Humans below.

In the paper by John Quarles, Samsun Lampotang, Ira Fischler, Paul Fishwick and Benjamin Lok, from University of Florida, “Mixed Reality Merges Abstract and Concrete Knowledge” we have seen that Augmented Reality helps .. merge abstract and concrete world. That means that it’s perfect for training on real and complex machines by adding abstract information that helps understand the underlying mechanics. When the user operates the physical machine, the virtual model is also updated, an you can see the updated augmented information to understand the results of your actions.

I really enjoyed the Virtual Humans sessions, and particularly the “Virtual Human + Tangible Interface = Mixed Reality Human” paper by Aaron Kotranza and Benjamin Lok from University of Florida. Here’s the abstract of the paper : 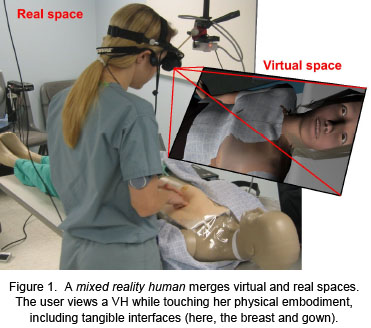 What this all means is that interaction with virtual humans help change real life behavior in the real world. Self perception is changed. ixed reality humans, by adding the dimension of touch give the trainee more empathy, social engagement, through interpersonnal touch. Touch drives the interaction. Users interacted with the MVH as if they were real humans, so what they learn in this training is directly transferable to the real world.

As for the honors, Bernd Fröhlich got the VR Technical Achievement Award, and Bowen Loftin got the VR Career Award.