I just got my Razer Hydra, the new cheap (140$/€) magnetic trackers distributed by Razer, and created by Sixense. 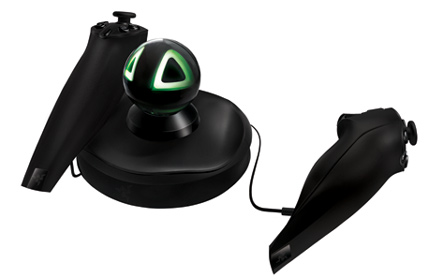 My first impression is that the Razer Hydra is really nice. It comes with two tracked controllers that are identical and both look like a big Wiimote Nunchuck. Both have a joystick and several buttons, which means you don’t have to buy two packs if you want to play with a friend. The controllers are ergonomically designed for adults’ hands.

The pack also allows you to download Portal2 for free. The game was adapted to use the Razer Hydra, and it was adapted quite well ! The movements are really smooth, and you can have some basic 3DUI interactions like moving a cube with a near 1:1 mapping to solve puzzles. It reminds me of Tumble for the PSMove.

The SDK is quite simple to use, appart the fact that you need to point the base with both controllers to initialize the right hemisphere tracking (a typical magnetic tracking issue). I’m sure there’s a way to hardcode this once and for all if you decide that you’ll always be on the same side of the base !

The SDK also seem to indicate that 4 players could each use two controllers ! Will it work if I buy plug more than one base ?

It seems you can tweak or disable the internal filtering, which can be interesting to do your own filtering. The jittering is present yet really minimal. Testing with a HMD will tell if it’s acceptable.

I haven’t measured it but the latency seems to be really low, see video :

The two problems with magnetic tracking are 1/ if you have metal in your surrounding it will affect the magnetic field, thus your tracking and 2/ you have wires.

The Hydra is also disturbed by metal (my desk has metal in it..)

And why, ooooohhhh whyyyyyyy so many cables ? Why any cable at all ?

It seems they are able to go wireless since “The Sixense wireless dev kit supports up to four controllers per base station. The Razer Hydra supports two controllers” and “A 12′ diameter use zone provides ample room for full-body gaming (wireless dev kit)”.

So maybe in the future they will lift this limitation..

Within this range the controllers seem to perform well, but more tests would be required to know if the precision is the same if you’re further from the base. They claim a “precision to 1 mm and 1 degree” at 60 hz.

Another small drawback is that there is no vibration in the Razer Hydra, which can always be useful for some simple tactile feedback.

Ryan Pavlik has already reverse engineered the HID protocol and integrated the driver into VRPN.

All in all that’s certainly an improvement upon the GameTrak + Spacepoint Fusion combo, but it could have been better without those cables. The vibration feedback would also have been a nice addition.

The range, precision, latency and ergonomic controllers (and price!) are really interesting.

Time will tell if it’s really usable for cheap VR. Attaching one Hydra to an HMD will certainly look ridiculous, and I hope that there won’t be any magnetic disturbance near HMDs..