I had the chance to meet Elizabeth Baron, last year’s IEEE VR Keynote speaker, and manager of the VR Center in Product Development at Ford. But I’ve never visited all their VR equipment ! CrunchGear was more lucky than me, and has a great overview of the VR usage at Ford to design cars. There is a lot more details about their process in her keynote !

So, of course they have a Cave : 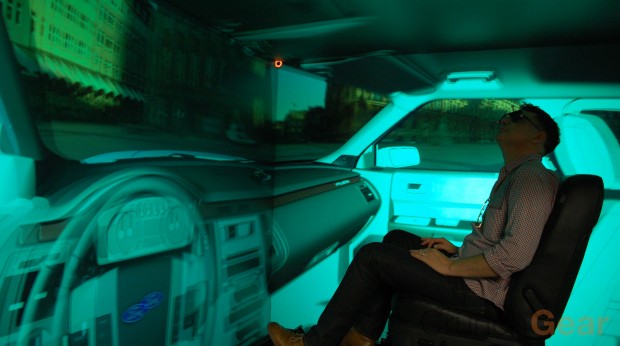 “This 3D environment is designed not so much for the ergonomics (…), but rather for style and craftsmanship. Four rear projectors generate 3D images on three sides and above the tester. The 3D glasses are equipped with motion-tracking sensors to further complete the environment.” 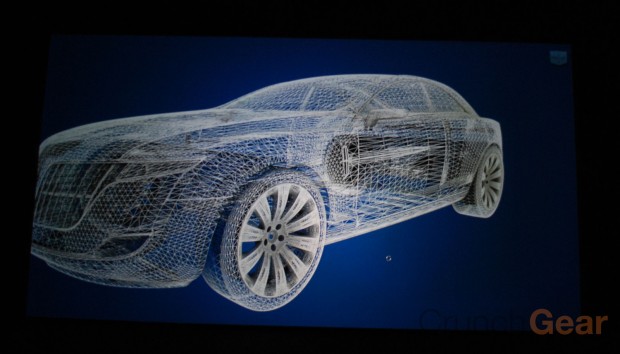 “Imagine a large room with a single computer workstation and a 20-foot screen as its display. That basically Ford’s Powerwall. It’s a place where designers to executives to auto dealers can gather and get a high-res look at Ford’s current and future lineup.

It’s a simple concept with Sony 4k projector connected to just a single high-end workstation, but the results are spectacular. Designers are no longer tied down to their cubicles and can explore their work in larger-than-life dimensions using AutoDesk & AutoStudio CAD programs to creating spectacular animations in Maya.

The Powerwall rooms are also equipped for worldwide collaboration and any one of them can host virtual meetings with the other seven Ford Powerwall studios found across the globe.”

And a simulator, the Virttex : 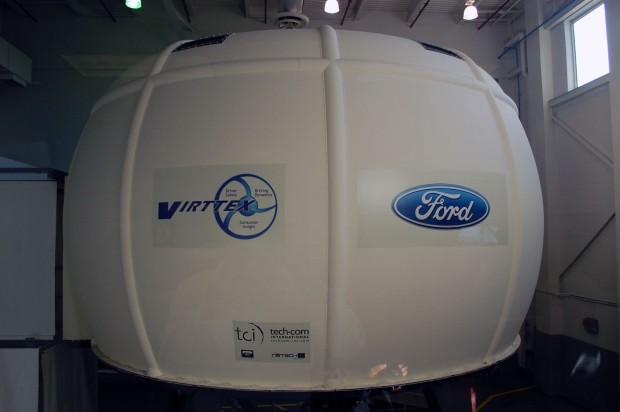 “Ride testing is key to any vehicle’s development. It can be expensive constructing prototypes that do not function right or are simply wrong. This is where the VIRTETEX simulator comes in.

A 24-ft dome houses a full-size vehicle — in this case a Taurus X crossover — that’s connected to a series of computers. Hydraulics, five projectors, and a bunch screens then immerses drivers in a virtual world.

The benefits are nearly endless. No more expensive and potentially dangerous test vehicles as the system can simulate most of the driving dynamics of a compact car or full-size truck. Testing and polling can be done in a controlled environment without any variables. And it’s just so cool. Imagine playing Burnout Paradise or Grand Turismo in this thing. The Ford engineers said they’ve never broke out the games but you know the six blade servers with high-end Nvidia graphic cards that powers the displays are just screaming for a bit of downtime.”

But I think my favorite toy would be the Programmable Vehicle Model : 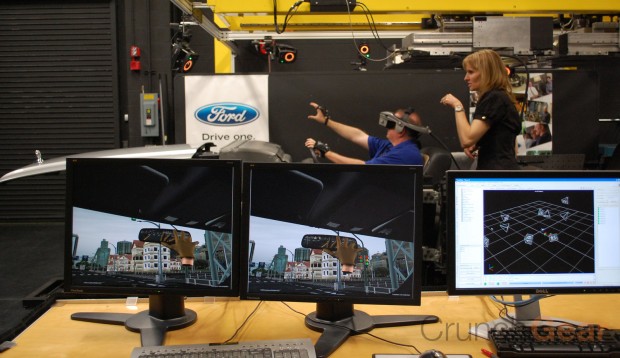 “Much of a vehicle’s testing is now done virtually [Cb: How much?], a processes that helps streamline development while keeping cost down. Ford utilizes numerous tools for virtual testing with the PVM at the heart of the process. It immerses the tester in a virtual world assisted by the physical presence of a configurable vehicle sled.

This testing sled is a complex platform that’s able to match the physical dimensions of nearly any vehicle. Once the physical properties are set, a tester sits in the sled wearing a head-mounted virtual reality display equipped with reflective spheres to enable 1-1 movement mapping. A pair of gloves with the same IR-visible balls helps complete the illusion.

The goal here is to allow designers and engineers the ability to test out their designs without building a full-scale working model. Nearly everything from seating position to steering wheel position to blind spots can be evaluated and worked out.”

Very advanced passive-haptics ! Moving the different physical parts so that it matches the virtual car is brilliant. And combined with an HMD you can completely occlude the physical skeleton and dress it with any car you want.

That’s a really practical and useful VR center, helping them to have better car faster, saving them months of developpment and saving them millions of dollars in development !

Thank you CrunchGear for the overview !