Miele, a german “manufacturer and supplier of washing machines, ovens, vacuum cleaners, and refrigerators”, is now using a CAVE to design and prototype some of its products. This article from Gizmag has a story about it :

By means of a cluster of nine high-performance processors, this allows for real time adjustment of the image detail and the image perspective to the user’s position. The 6.7 million pixels of the images are recalculated up to 30 times per second. Products and processes not yet existing in reality can thus be visualised, complex situations can be experienced intuitively and better comprehended. (…) 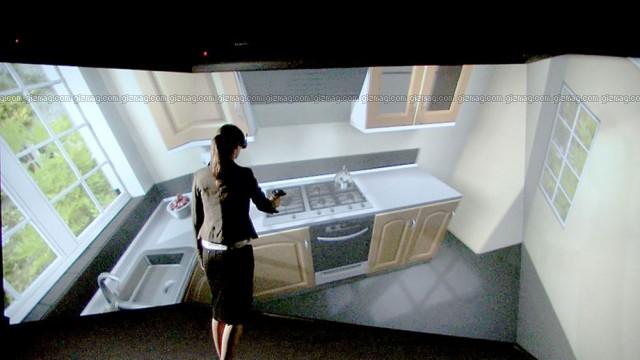 “The number of expensive, physical models and prototypes can be radically reduced by CAVE, and this ultimately saves a lot of time and money”, says Andreas Enslin, Miele’s senior designer. “Furthermore, the development process is significantly accelerated. After all, as designers, we are working in 3-D anyway. The new technology enables us to immediately discuss the different proposals and ideas with our colleagues from Engineering or Marketing and try things out.”  (…) 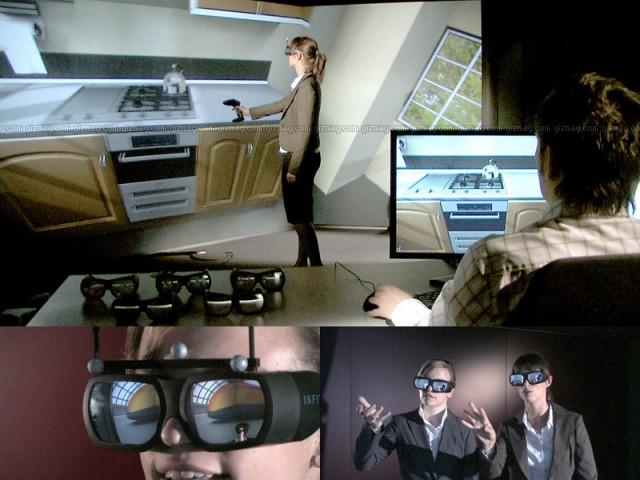 The Miele CAVE system cost the company around 1.6 million Euros and uses eight high-resolution cinema projectors with a luminance of approx. 7,000 ANSI lumen for each project perspective, polarised semi-images from behind to a huge, 15 metre projection screen of black glass. The screen is split into three sections and suspended at an angle of 120 degrees so that no distortion results by the deformation of the glass due to its own weight. Four head tracking cameras keep track of the viewer’s movements and transmit this information to a processor cluster of nine work stations. (…) 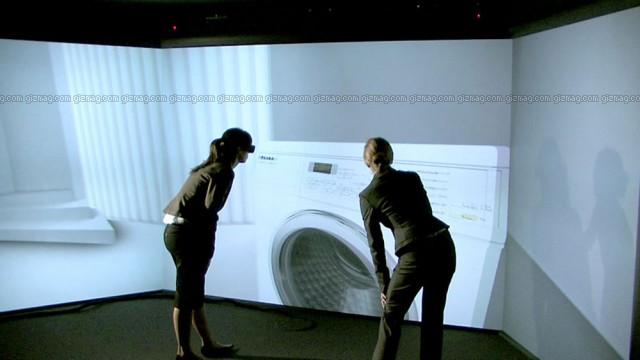 While the product development and design cycle has so far been a long sequence of design decisions and corrective actions, a whole package of decisions can now be processed efficiently says Enslin: “CAVE creates a quite different form of communication and cooperation. Marketers, designers and engineers can now deal with one issue simultaneously. Regardless of what comes up with me as a designer or engineer, I am able to immediately try it and see if it works. As everyone is seeing the same thing, those people who are not directly involved in the process of development and construction can also immediately see the consequences and effects of decisions.“

This is accomplished to the extent that the Miele devices in the future will also be tested for their serviceability: You can take, for example, a virtual tool and see whether e.g. the required screws can be accessed. Defects can be correspondingly corrected directly at the computer.

The speed gained is also expected to increase the willingness to experiment, Miele’s senior designer believes. “In this respect, our innovative strength will also increase. It has become much easier to try out something crazy in between.” Basically, of course, the standard remains that the Miele design has to express the premium character of the products. Andreas Enslin: “Our good reputation is essentially determined by our design. This has always been so and will remain this way. We are simply improving now.”

Although it’s not technically a cave (there should at least be a floor), it’s certainly nice to see that VR is spreading steadily into new business areas.