The Financial Times has an interesting article about the creation and the innovative business model of the Falcon haptics device : 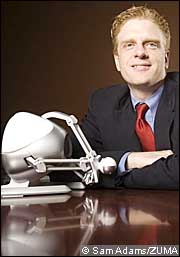 Mr Anderson decided the solution to this conundrum would be to force a breakthrough with the games publishers. “Instead of telling publishers, ‘We want you to support the Falcon,’ we said, ‘We want to buy the 3D touch rights to your game.’

“So instead of asking them to do something for us, we went to them and wanted to buy something that they didn’t even know they had – and we were the only company that could buy it.”

Novint was finally able to turn its attention to the consumer market when Mr Anderson acquired a design for the Falcon’s hardware from a company called Force Dimension, making such a device affordable for the mainstream market for the first time.

While Novint reported revenues of just $156,000 and a net loss of $4.1m for the first six months of this year, the chief executive says it has now reached an inflection point with wide acceptance of its new business model.

So while the appeal of his device is at present confined to early adopters, Mr Anderson believes the Falcon, or something like it, can achieve mass market appeal. “The field of haptics – our sense of touch – will easily be as big as graphics, but people don’t know it yet, it’s not in the mainstream.”

“This is what makes virtual reality seem real – vision and sound are important, but being able to feel as well is the missing piece of the triad.”