The “Medecine meets VR” conference, 17th edition, will be held in California on Januray 19-22.

Their blog publishes an interview of Dr Albert “Skip” Rizzo who gave a keynote at Laval Virtual 2008.

Here are some bits ranging from VR exposure therapies to whether cyberspace addiction is bad or not :

Albert “Skip” Rizzo received his Ph.D. in Clinical Psychology from the State University of New York at Binghamton. He is a Research Scientist at the University of Southern California Institute for Creative Technologies and conducts research on the design, development and evaluation of Virtual Reality systems targeting the areas of clinical assessment, treatment and rehabilitation.

This presentation [at the MMVR conference] will focus on our development of an inexpensive and easy to deploy webcam-based tracking system that is now good enough to support high-fidelity capture of natural motor movement for interaction within VR game-based physical therapy worlds. (…)

For PTSD exposure therapy, the outcome data from our group and from what I can glean from the VRMC lab, are very encouraging.  (…) From this, it appears that the technology is not the limitation anymore. VR simulations are “real enough” to provide the necessary fear/anxiety arousal needed to promote the therapeutic process of habituation. To be quite honest, it doesn’t take much for a patient with PTSD to get engaged in the Virtual Iraq simulation—their disorder essentially “primes” them to react to the virtual content in ways that folks who have never been exposed to such combat-related trauma, don’t fully apprehend. The real bottleneck is in the training of clinicians on how to properly administer VR exposure therapy in a safe and professional manner. Current VR exposure systems are simply very powerful tools that extend the skills of a well-trained clinician. The challenge is to find enough of those well-trained clinicians to provide informed care for the number of folks coming back from Iraq/Afghanistan with psychosocial difficulties!

(…) [Our] design of the clinician’s interface—a control panel that allows the clinician, in real time, to systematically monitor what the patient experiences in the simulation and to add or take away provocative stimulus events (sounds, sights, scents and vibration) as is required for effecting the anxiety modulation necessary to achieve the therapeutic effect of habituation when conducting exposure therapy. For example, the delivery of scent into the simulation is controlled via the clinician’s interface. We use an Enviroscent system with chambers for 8 different scent vials (gunpowder, diesel, burning rubber, body odor, etc.) through which compressed air is pumped to carry the smell temporarily into the users simulation space. 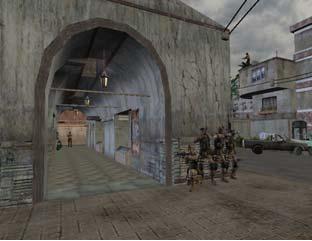 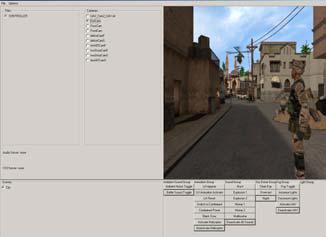 > What qualities do you see as most important for a realistic/convincing/successful simulation?

(…) Multisensory input, well-designed interface, responsive tracking, flexible ability to adjust software parameters, etc. Also, knowing what type of display format best addresses the clinical target is a key issue. There are some app. areas where full immersion is less relevant, like in many of the motor rehab applications where a nice wide FOV stereo screen works great. However, for all the criticisms that HMDs have been subjected to over the years, I believe they still are the best approach for some of the psychological applications where full immersion is important—and with some of the more recent systems that are available with built-in 3DOF tracking (eMagin, Vusix), they are portable, low cost and can allow a clinician to “do” VR easily in an office setting.

(…) the Novint Falcon force feedback system now offers a new set of options for game-based rehabilitation at a cost of less than an IPOD! We have now developed bimanual coordination games for stroke patients by yoking two of these devices together on a single laptop and some of that work will be presented at MMVR this year.

(…) Even more contentious is the debate as to whether children and impressionable adults will display dysfunctional behaviors due to extensive exposure or experiential play in cyberspace! (…) This literature has produced a lot of small sample size, albeit provocative, one-off studies (just skim an issue of CyberPsychology and Behavior) and a few large scale studies with contradictory results and no shortage of heated debate. This is consistent with the history of similar concerns that have always been raised whenever a new media form is embraced by the masses (film, comic books, TV, video games, Facebook, 2nd Life) or with the rapid adoption of everyday technology-based productivity/communication devices (from calculators to PDA’s to IPhones). (…) somehow the use of pocket calculators never actually produced a generation of children unable to do simple addition!

(…) While there will always be a percentage of the population that will get consumed in any type of media use to a degree that could be consensually agreed upon to be unhealthy, that assessment is still a value judgment. Whether it is a good or a bad thing that I have learned more about the history of the world from watching the History Channel, than from years sitting in history classes in school is a value judgment. Determining whether an isolated, insecure person with poor social skills who finds some connection with other people in cyberspace is further withdrawing from the “real” world or is learning to interact with others in what they perceive to be a safe environment, requires a value judgment. Consequently, no fully satisfying, comprehensive or generally agreed upon answers currently exist for these questions, yet.

(…) I don’t believe that you create a healthy society by limiting one’s choice of media options. Perhaps working to create a healthy society in other domains (better education opportunities, improved healthcare, electing political role-models that are honest and caring), would be a better place to focus ones energies than to blame cyberspace or an individual’s personal taste in media for the ills of the world!

That’s a great way of seeing things, I’m happy Dr Rizzo is taking such positions. I myself don’t know where I would be now if I hadn’t spend so much time with computers during my childhood or if my parents had forbidden me to do so fearing that I’d become a zombie.

But still, you have to watch after your kids’ activity in Cyberspace since they don’t know how to regulate it themselves.

He also confirms what I’ve been saying for quite some time now,  we have good enough hardware but we don’t make the most of it!

If nobody is doing it I’ll have to do it myself ..