Lutz Jancke, from the Neuropsychology lab of Univeristy of Zurich, made an amazing presentation about the reality of VR to our brain. The short answer is for the brain, VR is just another reality; the brain only interprets inputs from its senses and experience, and VR is providing inputs that can be realistic enough to fool the brain. Moreover, VR experiences can shape your brain!

The brain evolves during all your life

The human brain is highly constructive, and constructs reality with the input it gets from the different senses. Perception of our world is a matter of interpretation by your brain of these different inputs. 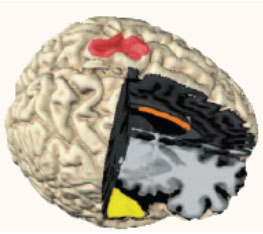 It also appears that much of the grey matter that makes us humans (visual sense, language etc..) is not determined by genes. In fact the brain is largely prepared to learn, it’s a giant learning machine that is able to learn during the whole lifetime of a human. During all your life your brain is restructured based on what you do, what you train at, for example music, juggling etc. But your capacities also decrease when you stop practicing.

Grey matter density can increase with elder people too. Aging doesn’t prevent learning; the cognitive aspects of learning of an elder people is comparable to youths.

But the DLPFC of a human matures very late, so children are not able to control their emotions. Kids show strong emotions, can’t control their pleasure and are in danger of getting addicted to anything, games or VR for example !

That’s why parents have to play the role of the DLPFC by training the kids to restrain themselves; we have to replace the DLPFC by authority.

It also seems that the pre-frontal cortex, responsible for the control of behaviour, self discipline and motivation only matures at 20 years old, so that would explain behavioral problems of teenagers. (wow I should tell that to my mum!)

It’s also one of the first brain areas to degenerate with age if it’s not properly activated with specific tasks.

Studies have proved what we intuitively already knew; even on a simple screen, 1st person view is more immersive than 3rd person.

Another experiment was conducted with a driving simulator. During the ride, a deer or a child would jump on the street in front of the car. It turns out that people didn’t get used to the kid jumping on the street, proving that the brain is working as if the situation was real!

VR has a huge potential for training and rehabilitation even if you only take the motivational part; as VR is more interesting/fun, people will want to take the training or rehabilitation sessions whereas they get bored and don’t show up at traditional sessions.

Motivation is the most important factor in learning, and VR is very motivationnal!

The brain constructs reality. It is remarkably plastic and matures late, and for him, VR can be real.

The brain can also be shaped by VR experience.

M. Janke states that The Matrix is completely possible; reality is already a virtual world. We interpret reality through the lens of our experience, and if properly created, a virtual environment can seem very real to the brain, with all the positive and negative aspects this can give to its creator.

So let’s use that great possibility for the better!