I’ve just found myself wanting to test some OpenGL stereo and I couldn’t find the old-school OglPlane.exe program. 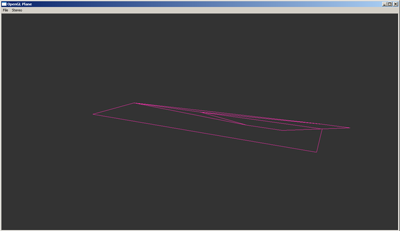 We use that regularly to debug stereo :

Client: There is no stereo in Virtools! It’s all your fault, I hate you!

Us: Could you run oglplane and tell us if it’s in stereo ?

Client: No it’s not, I’m sure Virtools broke everything!

Us: Could you activate the stereo in the graphics card drivers ?

Client: Ha, now the plane is in stereo, but still not Virtools, you morons!

Us: Could you change the Virtools stereo parameters ?

No answer from client.

Alright maybe it’s because of the Virtools’ documentation =)

OglPlane was developped by Stereographics, makers of the famous 3d glasses and stereo handbook, which was bought by RealD.

It seems the software was hosted on RealD website but I really can’t find it, so I got it on my work laptop and uploaded here:

The zip also contains the source code and visual studio project so you can also learn how to setup quad-buffered OpenGL.