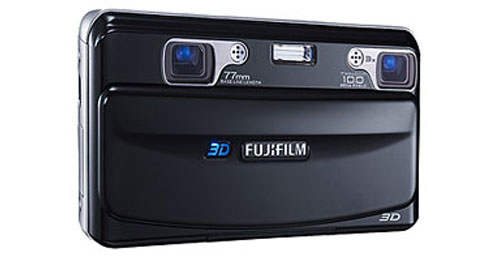 Last year, Fuji announced a set of devices to capture/display 3d pictures. Now this is getting closer to reality. This 3D camera has two lenses and an autostereoscopic LCD on the back.

Back at Dimension3, I had the chance to test a cell phone with stereo capture and autostereo screen, and it worked much better than I expected, so I’m quite optimistic about this!

<nearly out of topic>

I nearly bought a stereo lens for my DSLR but some other 3D geeks told me that by ‘simply’ taking two pictures with the help of a special tripod head it was easy and less expensive. But it only works for very static objects.

I’ve heard that people taking pictures for autostereoscopic prints are doing exactly this, with some automation. The camera slides quite fast on a trail and shoot as many pictures as needed (from 8 to much more) in a short timeframe. The geeks from Alioscopy even created an asymmetric camera where the sensors slides, in exactly the same way and for the same reasons as our VR asymmetric cameras do!

</nearly out of topic>

But of course taking two pictures at the same time is the easiest way to go, and it’s really nice to see that this is coming to 3D geeks near you, and I hope this will reach even more people than that!

Fuji also plans to have sell an autostereoscopic photo frame, and an online service to print lenticular pictures.

The 10-megapixel 3D camera will first appear in Japan sometime this summer, while Europe and the US will get it during September. Pricing will be set at around $600, with the photo frame costing a few hundred dollars as well. Prices haven’t been set yet for prints, though Fujifilm doesn’t anticipate customers accepting high prices.