I’m back from Louisiana after having spent a few days visiting the state and especially New Orleans which is a really nice city ! I’ll put some pictures here soon and I hope to have some time to say more things about IEEE VR.

Their point is that it would be easier to understand the structure of a database by looking at it in 3D. It would also be easier to remember it visually.

And it looks really nice! At last something that looks like what you see in movies and could be useful =)

Any researcher wants to do some analysis of this technique compared to 2D exploration ?

On their website you can see more videos explaining the concepts, download a demo or buy the product. 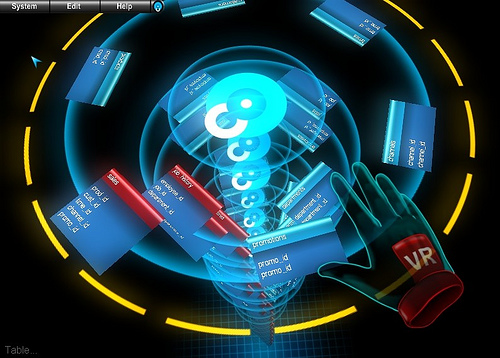 Read after the jump for an interview of Maxim and Victor,  some homebrew VR and more videos !

After some years working with databases and five years of working in realtime 3D  they created a research team called VRM in Kiev, Ukraine, to focus on immersive and interactive techniques.

During Maxim’s 4 years of working with large-scale databases, he started getting ideas on how to improve database administrators’ daily life :

“I’ve noticed some common tasks that many DB developers are facing frequently and decided to make such tool in future. And of course I’ve dreamed about VR interfaces, not only eye-candy one’s but useful also. (…)

The third dimension must bring additional information. In our case 3D allow to organize valuable information inside our database-column. For example – basic reference tables are located in the bottom, and fact-storing tables at the top.

Immersion in such interfaces is also a method for better mental concentration.”

Victor : “Practically it means that using DIVA one can create a mental visual image of DB’s logical structure in a whole, rather than a pack of separate dependency details, like remembering how table Employee connected with table Manager. The next step is the actual interaction with the 3d model, while looking for dependencies users navigates 3d model and details in mental visual image starts to emerge themselves as he gets more and more visual information. This way you grasp logical structure faster and together with graphical appearance it ensures that you will not forget next day. 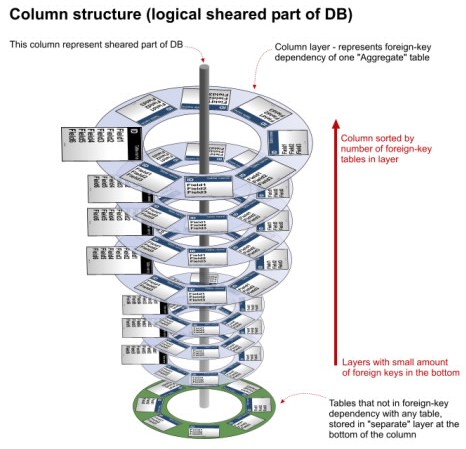 Immersion plays a major role, it grabs all attention and mental focus of user on object of interest. In addition you get a fun factor. All this improves education process.”

I sent DIVA to a DBA friend and he really liked the idea and software. 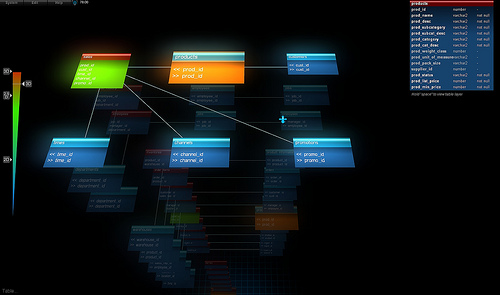