Tonight I went to a conference organized by the french chapter of the International Game Developpers Association, about old school game development. Invited were Philippe ULRICH et Didier BOUCHON, from ERE Informatique, authors of some mythical games like Captain Blood, and Eric CHAHI, author of Another World (Out of this world).

Mr Chahi is a sort of hero for me. He created Another World alone, at 22, for two years. When I first played his game on my Amiga, I remember getting a shock. This game was like nothing else I had already seen, both on the graphics and the game play point of view. Sometime after that, I locked myself in my teenage room for 1 month to program my first game, a bomberman clone in C and asm on PC.

15 years later, Another World is going out again, with improved graphics. I bought it, and it brings back a lot of memories. I was really happy to hear about this conference, and surprised to meet Mr Chahi at the entrance of the building as he arrived. As I instantly recognised him from the making-of videos included with the new Another World edition, I chatted with him a bit.

This and all the talking of the evening was really interesting. They all shared stories of the past, of these glorious days of games, and their thoughts about the state of the gaming industry. 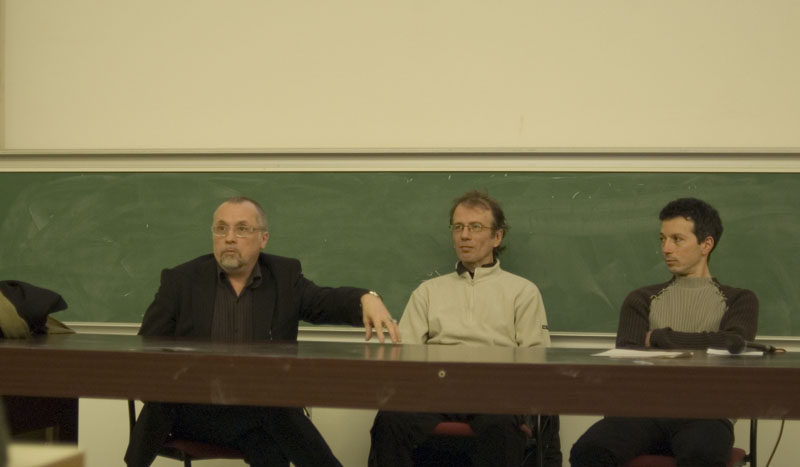 Mr Ulrich was particularly disappointed by the lack of courage of investors and game developers. He thinks that risks should be taken, and that being successful is a very relative thing. Even if you make successful games your company can (and for him did on some occasions) close its doors, or fire you. So just step back and get back to work! He was particularly bitter about games (and music) being marketing driven, rather than creative driven. Going the creative route is a risky way, but very much worth it according to him. He also points out that finding funds nowadays is quite easy.
He also mentioned that it’s not because you sell lots of copies that you will make more money than an independent game that sells 10x less. How much you spent on marketing is too much? Word of mouth costs nothing.

Mr Bouchon, whom I had already met twice (one of which being this afternoon…) without knowing who he was, shared the story of the creation of Captain Blood. It was not a predefined idea, but rather a collection of ideas and piece of code put together to create a game “we were not even sure people could finish” ! 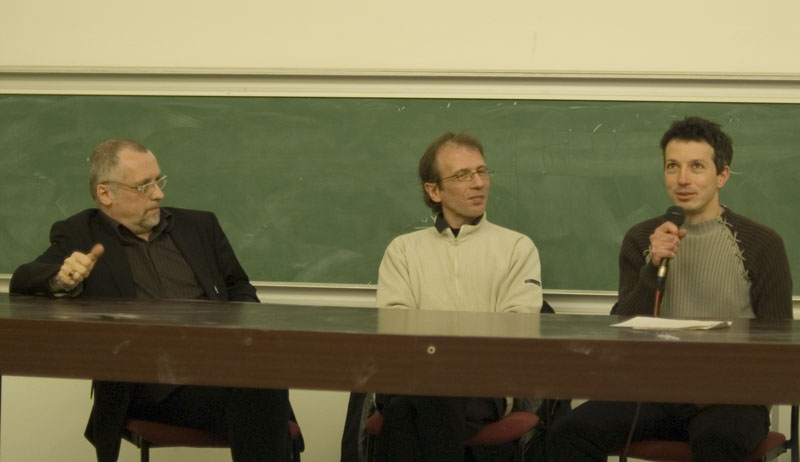 Mr Chahi had an interesting memory about the financing of his games during those days. The money given by the publisher for one game would be used to finance the next game. The publisher wouldn’t invest any money, and the programmer was free of any pressure, and could create the game he wanted. The only pressure were material, of course, some day the money runs out! Another World was already his 10th game. He adds that he prefers working alone or with small teams, because creativity is improved. He is now involved in the creation of a new game (maybe PC/Wii) but he wouldn’t talk about it.
If you’re interested in the creation process of Another World, go buy a copy of the new edition, the making-of is particularly interesting (in french only I guess), or go here.

This may sound cheesy but I even have an autograph :p 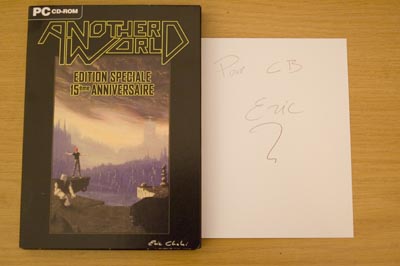