How would you allow two users in front of a projection screen to each have their own stereo ?

I’ve seen such a system in Weimar at IPT/EGVE 2007 and I hear several systems are starting to use this.

So here are three methods, demonstrated thanks to my Advanced Sketching System (c) :

Method 1 : Users are separated through a polarized filter 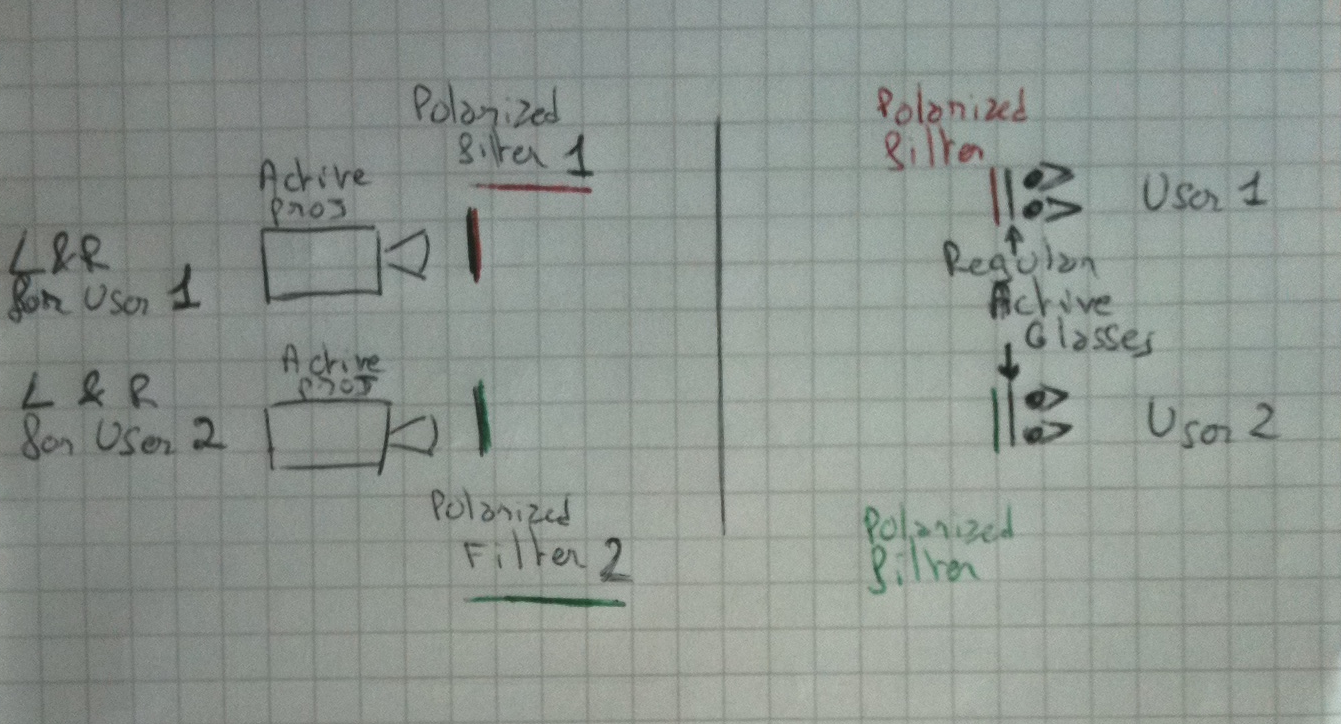 This can be seen as a regular active stereoscopy system.

Thanks to the polarization, each user sees only one (active) projector. Each projector displays left and right image as is regularly done with active projectors.

In theory, you have it, each user sees in stereo ! This is the “easy” way which doesn’t need too much modification apart from adding polarized filters on shutter glasses.

The active stereo provides a good separation between left and right eyes, but the polarization separation is not perfect, so each user sees a ghost image of the other user.

This unperfect separation of polarized filters is less problematic when it is used for only one user since the left and right images aren’t that much different. But when you see the picture of another user, it is potentially very different and can also move while you are static. That’s a real presence breaker !

So let’s try another way :

Method 2: Users are separated through a shutter mechanism

Now this can be seen as a regular passive stereoscopy system. For each user, the left/right images are separated thanks to a polarized filter.

But how can you hide the left/right images of the other user ? With modified shutter glasses that shut both eyes at the same time rather than each eye alternatively !

Shutter glasses would then open only for User 1 left eye, all other eyes/users being shut, then User 1 right eye, etc.

This has several implications, ranging from flickering if the projector frequency is not enough, to decreased luminosity. You also need special shutter glasses and software to support all this.

This is not an easy topic! But an important one if we want real cooperation. I’ve left the option for multiple HMDs aside because you don’t see the other user, and some people just don’t want to wear HMDs.

I’m sure others methods exist, such as this one presented at IEEE VR 2009: Image Blending and View Clustering for Multi-Viewer Immersive Projection Environments, Jonathan Marbach

Do you know other methods ?