The tradeshow was renamed as “Virtual Reality and Converging Technologies”. Indeed, there is more and more  “converging technologies”, even though all the major actors of VR were here and had the biggest booths.

The most interesting display for me this year was a transportable Cave by Realyz, the Mobilyz. It can be transported with a regular car, mounted in half a day, and rented on a daily basis. The problem with Caves it that you have to bring your clients inside your Cave. With the Mobilyz, the Cave comes to your client ! Of course the rent price is much much … much lower than building a Cave and you don’t have to worry about the hardware. 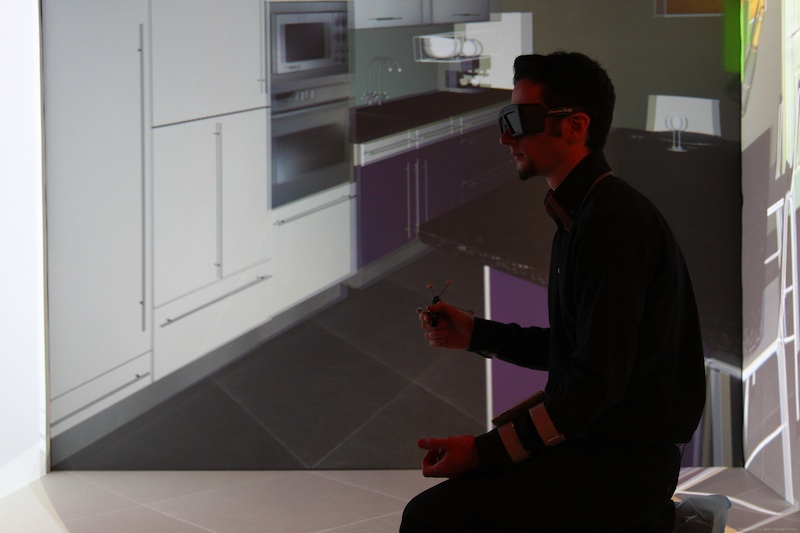 This means that we could probably build a Cave which takes a lot less space than if you use projectors ! 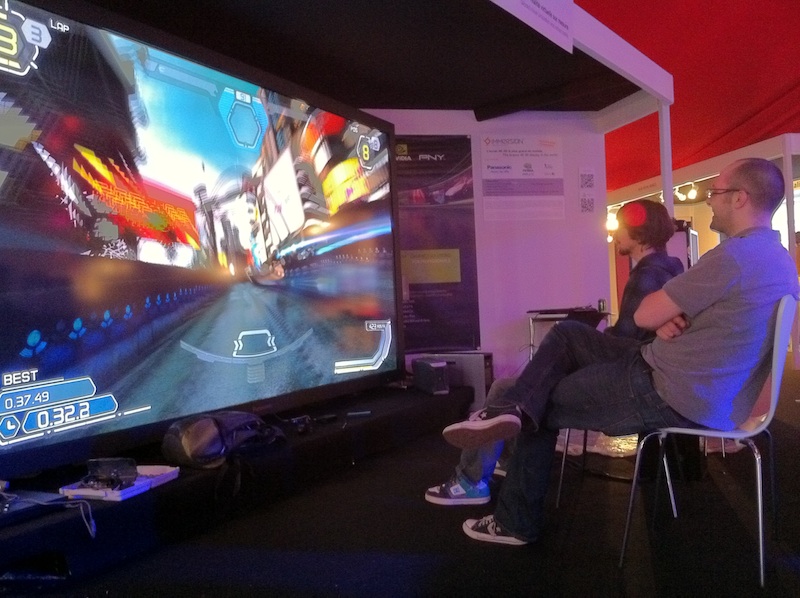 Immersion also demonstrated their great multitouch table, which can provide a tracked and stereoscopic view for two users !

I have to say I was impressed. The double stereo (probably using one of these techniques) was working right, the immersion was good thanks to flawless tracking, and the multitouch interaction felt very natural. And of course the collaboration with another user is very interesting. 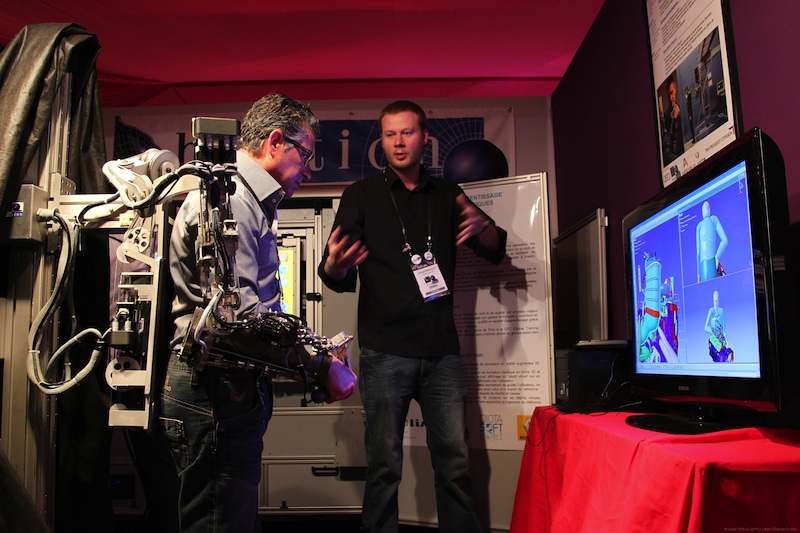 Barco was demonstrating a new spherical display, the RP-360. They only brought a part of the sphere : 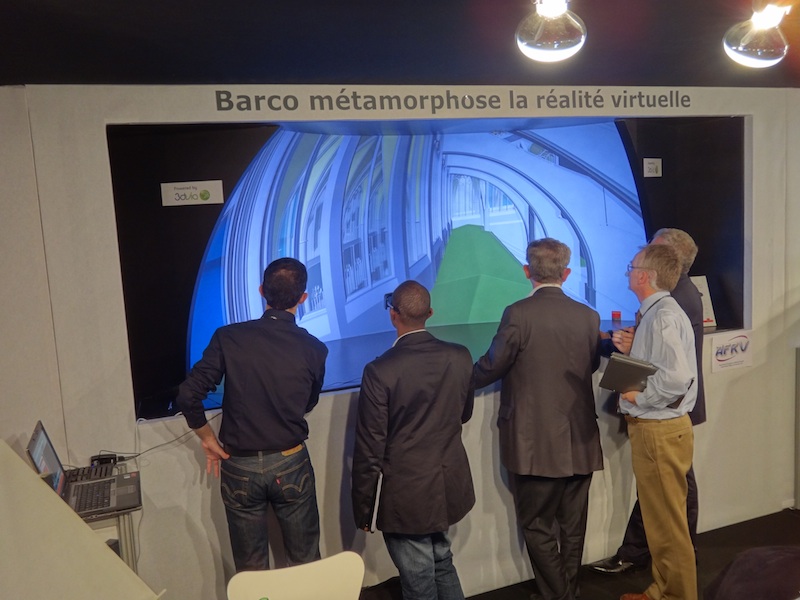 The whole system is 3m of diameter, uses 13 projectors, and the actual sphere looks like this : 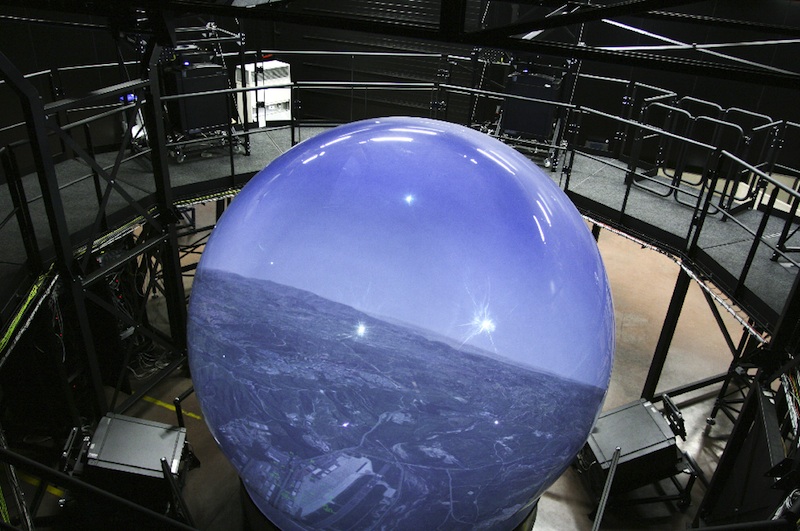 Which of course is reminiscent of the Allosphere.

Clarte and Saint-Gobain were demonstrating an interesting simulator, to train for the projection of isolating outer layers, of houses for example. The gesture to accomplish this projection properly requires training and a lot of expensive raw material. The gesture is not very complicated, but it has to be very precise : you have to move steadily, at a given distance, at the right angle : 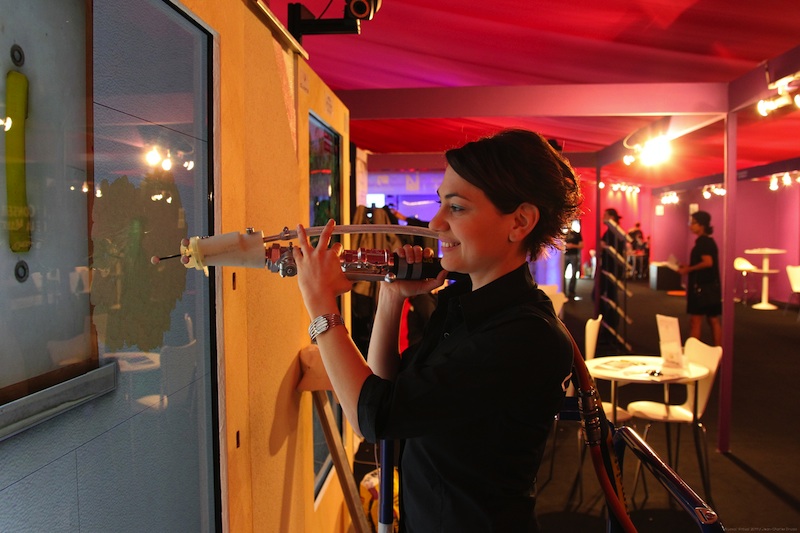 The simulation has realistic feedback: you can feel the flow of material coming out, feel the weight of the nozzle, have to manipulate the valves..

By using a simulator, the company saves a lot of time and money on the material, and the training is also more efficient since you can review the gesture afterwards : 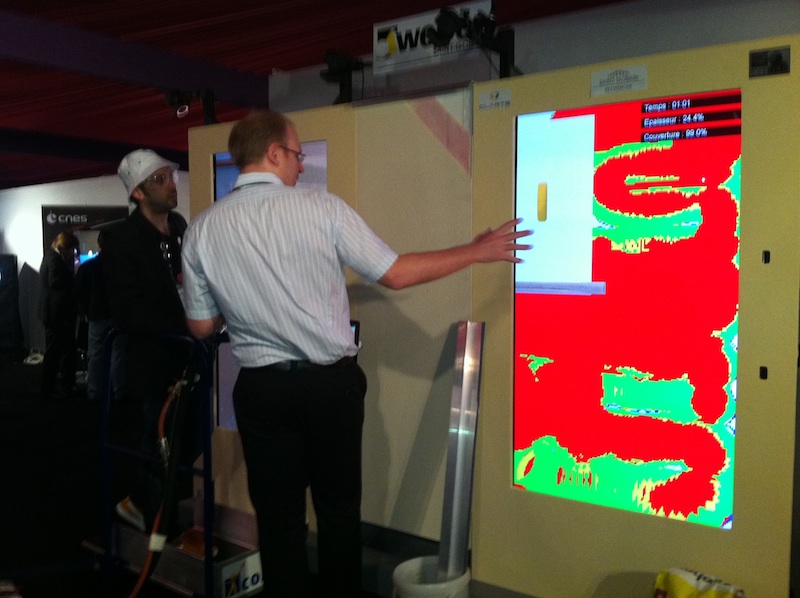 This screen gives a detailed review of the whole session, and the trainer can explain what should be improved.

Students of the ESIEA engineering school improved on last year’s Virtual Showcase and built a spherical one. Inspired by the VR Geeks, they used the gametrak as the head tracker to achieve a really nice, low-cost and innovative display ! 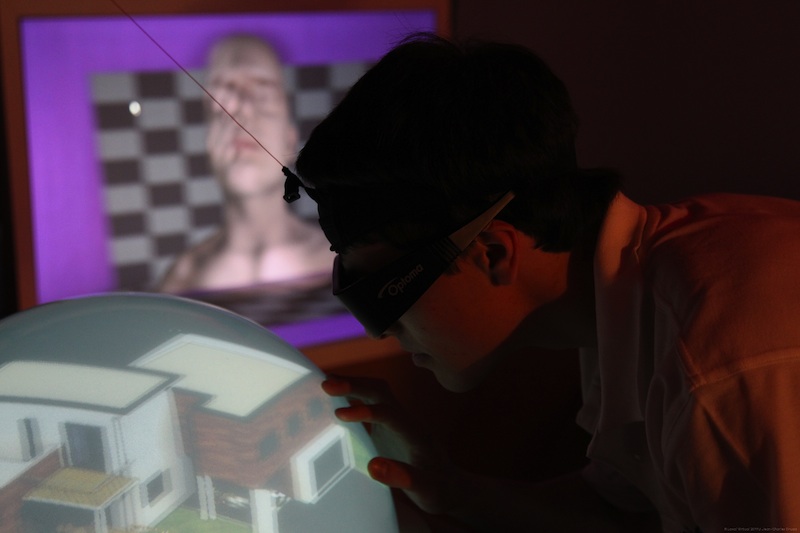 (The flickering is only due to my iPhone)

(I muted the video because we (well.. I..) were making silly sounds 🙂

They were led by their teachers, Jerome Ardouin, Marc Lerenard and Frank Crison, who also created an impressive home-made, cheap workbench : 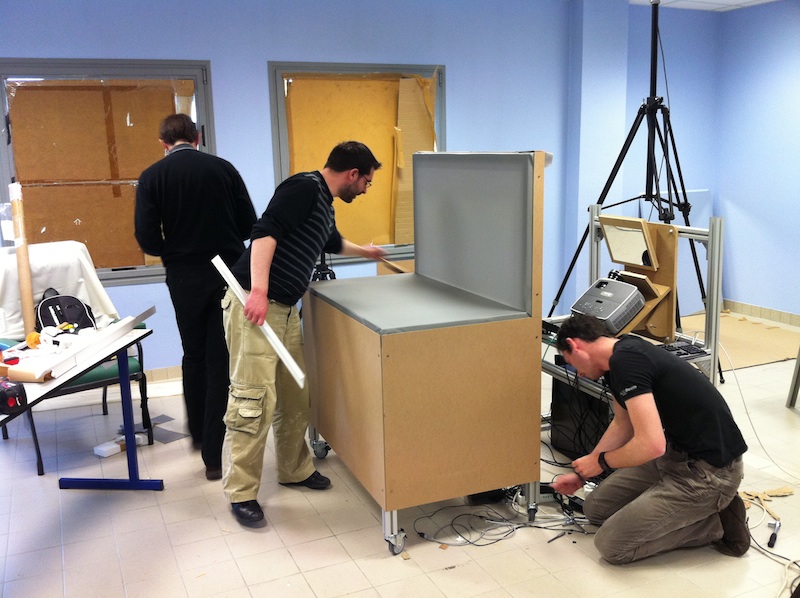 – Frank, Jerome and Marc hiding from the camera –

I don’t have any picture of the workbench running, but believe me, it was working really good!

Once again this was a very intense year. And it’s the first year that I see so much media coverage of the event, especially on twitter or blogs !

The VR gets a bit drowned in the middle of a lot of “converging technologies”, but as you can see innovation is still happening.

There wasn’t much new usage for VR, but we definitely see a big trend in hardware democratization. Cheap 3d projectors, NVidia 3D Vision, Vuzix HMDs are gaining momentum. But Kinect was definitely the king of the year. It was released just on time so people had time to create applications with it and show them on the tradeshow.