The VR Geeks (non-for-profit association) were invited to the Laval Virtual tradeshow, the largest VR tradeshow in Europe !

(Update: by the way, we now have a Facebook page. We’re trendy. )

Our secretary David built a projector mount for less than 50€ : 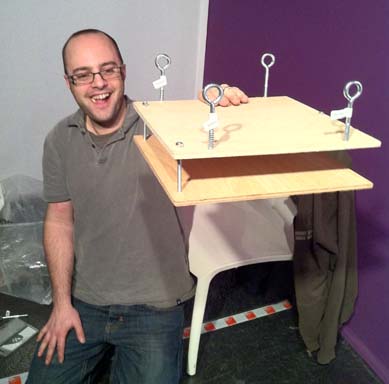 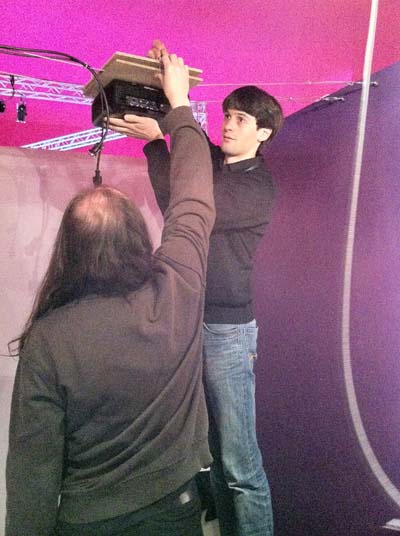 This allowed us to have two immersive VR setups (a VRKit-Wall and a VRKit-HMD) for less than 2000€.

During the three pro days we had a lot of people interested to see what we could do with such a limited budget, and most people seemed to like it a lot.

I think we really achieved our goal of proving that it’s possible to create really immersive experiences with low-cost hardware.

– VR Asteroid, created by our fellow Ukrainians VR Geeks of VRM, which attracted a lot of people thanks to it’s beauty, simplicity and immersion.

– VR Sadistic made a good impression thanks to its innovative gameplay :

– and finally VR Escape which has more interesting 3d interactions.

All in all, people were rather impressed by the quality of our content and by the immersion of our VR systems.

We also had a poster at the international conference, VRIC, about those two cheap VR systems : Low-cost and home-made immersive systems 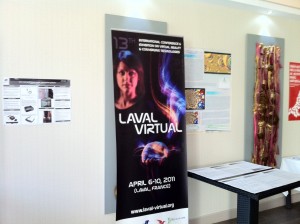 Saturday and Sunday were dedicated to the general public, who often only knows about 3D games. We showed only VR Asteroid and Sadistic because they can be run without the fragile, wired, Gametrak.

The public was impressed that we did all this for free, on our free time, and we baptised a lot of people, from the youngest to the oldest ! 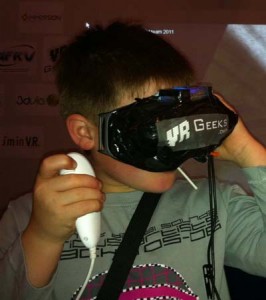 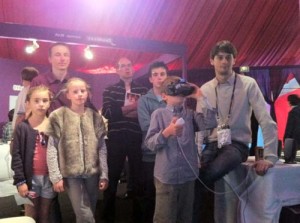 The association now has around 60 members, the French mailing list has 130 members. We also got more press coverage : http://www.vrgeeks.org/in-the-news 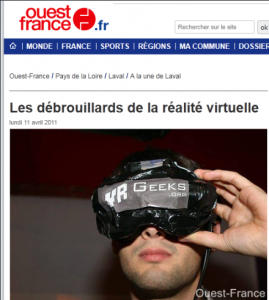 We also bumped into Carolina Cruz-Neira, co-inventor of the CAVE system, who like our work and accepted to be an honorary member of the VR Geeks !! (You can tell because she has the two VR Geeks badges 😉 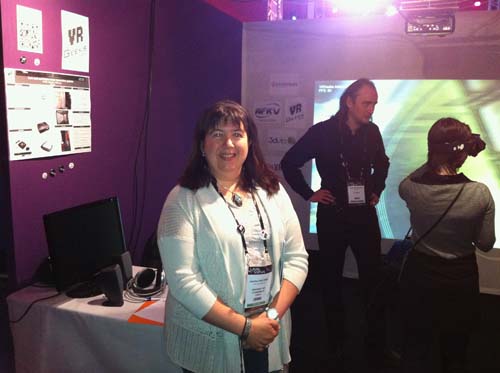 That was a (very) intense tradeshow, but it was really worth it ! We had a lot of fun and met a lot of people!

A big thank you to Nicolas and Sylvestre for being there the whole time, and to all the VR Geeks who participated to make this even a success ! 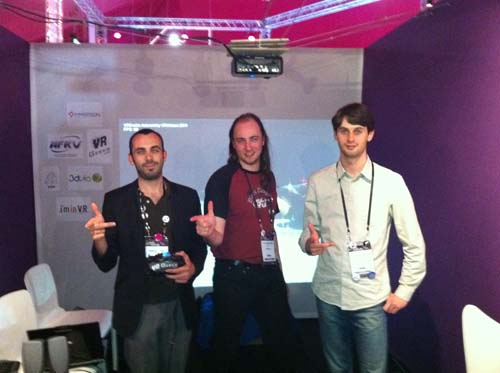