I’ve been able to test two new Caves this month :

– The EVE of the Limsi lab

They are typical modern systems: they are reconfigurable and the pixel density is not uniform (for the SAS3+). 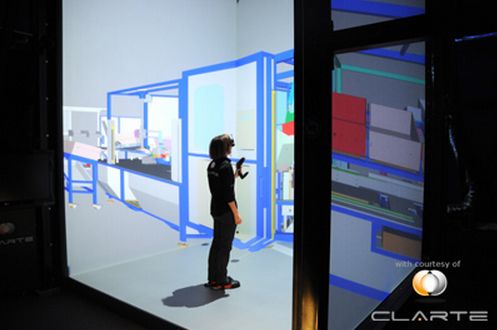 The SAS3+ is the follower of the old SAS3, which was inaugurated 10 years ago.

This Cave has four screens. The three vertical glass screens are 3m wide and 4m high, so you don’t need a ceiling. There are 8 full-HD projector, 12000 lumens each, resulting in 1.5mm pixels.

6 ART cameras optically track the user, two of which are in the bottom-left and bottom-right corners. This means that they had to cut two holes to put these two cameras. If you look carefully you’ll notice them, but they become completely invisible once you’re immersed. Putting the cameras here allows the user to bend to manipulate low objects without losing the tracking of the head or the hands.

But the most innovative part is the way the projectors are setup. You would think that for each face, you would put one projector for the bottom-half, and another for the top-half. But that’s boring. 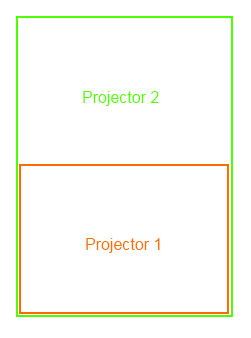 For each wall, there’s indeed a projector for the bottom-half, but the second projector is in portrait-mode and can project on the whole surface !

– the standard one is to have Projectors 1 (P1) on, and Projectors 2 (P2) projecting only on the top-half. Each of the projectors are full-HD, but since P1 covers a smaller area, the pixels here are smaller than those in the top area ! You don’t need as much resolution above eye-level.

– the economic configuration doesn’t use P1 projectors, but P2 projectors project on the whole surface. The pixels are bigger but you save the energy and lamp time of 4 projectors. Priceless !

– the full-patate mode : P2 projectors aren’t turned on, only the P1 are projecting. You only get a half-size picture on each wall, but you have a much brighter image. Indeed, in standard configuration, since P2 projectors cover twice the area of P1, they are twice less bright ! So P1 projectors adapt their luminosity down to match that of P2. If you turn off P2 projectors, you can turn the P1 to full-patate, up to 11 !

This multi-resolution (different pixel sizes across the system) is a new trend which you can also find in the Dassault Systèmes’ Cave, the LIVES. The front screen has four projectors, the side two, and the floor only one.

With this new system, Clarte has become one of the biggest VR center of Europe, if not the world !

They now have two Caves (the old SAS3 has been transformed into the SASLab), a workbench, a collaborative room, and  nice haptics devices.

And of course, great applications on each, such as VR4D, TT3D (formerly Sitac) and Ergo-Wide3.

The Limsi finally got its long-waited 3-sided Cave, the EVE ( Evolutive Virtual Environment ) :

The EVE system and associated 3D audio platform have been designed to provide multi-user and multi-sensorimotor perceptions in a large and reconfigurable immersive Virtual Environment. Built within a large room with strict acoustical constraints, they are equipped with several multi-user 3D audio facilities (Binaural, Ambisonic, and Wave-Field Synthesis). These equipments can be connected to a set of shared or separate haptic devices.

The visual display of the EVE system is composed of several 5m-high HD screens surrounding a 13m² floor-glass screen. Stereoscopic images are retro-projected on all these screens, with each projector enclosed in specially designed acoustic casings. Three main configurations are possible:

Yes, they can also reconfigure their system ! Either they project on the whole surface of the Cave (one projector for the bottom-half, one for the top-half), or they use the two projectors on the same area to create multi-user stereoscopy using the technique described here.

Pierre Martin promised he would send a video when he’s allowed to, so I’m waiting 🙂

As the cost of those systems is very high, the conceptors try to maximise their use thanks to reconfigurability. They also tend to optimize the pixel density : very small pixels where you really need it (in front of your eyes mostly), and less where you won’t notice the difference (high above or on the floor).

Of course the ideal would be to have lots of pixels just where the user look, but that’s not yet possible.

As old Caves are ageing, a lot of them are being updated. And new ones are coming.

VR is spreading, I’m telling you 🙂