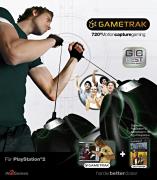 I finally was able to open my GameTrak box =)

[Note: if you buy a PS2 Gametrak, you’ll have to physically modify it to work on PC.]

The setup is really simple :
– Plug the foot mat to the base,
– Plug the USB cord to your computer,
– Put and plug the gloves

And you’re ready to go. But where to go? I bought the system alone, with no game.

Suddenly I had a doubt. Will I be able to use the gloves without a SDK? 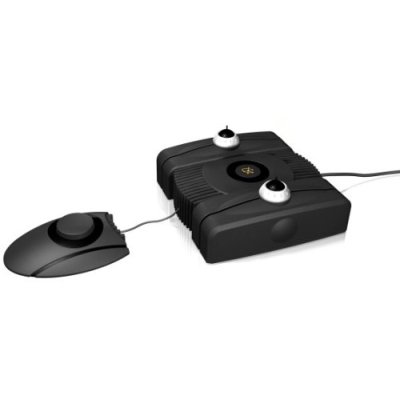 I went into the Control Panel > Game Controllers, and was happy to see a GameTrak entry.

At first the output seemed strange, and I was afraid some computing would be needing
(like if they gave orientation of the base plug and lenght of the cable).

But it all made sense quite fast :
the position returned by the controller was indeed the x,y,z datas of the first glove,
and the x,y,z rotation is in fact the position of the second glove.

Wow, I’m so clever. lol. Edit: I’m not that clever after all, see Gilles Pinault’s comment below :p

Of course, the axis were wrong; GameTrak uses X,Y as the base plane, and Z as the height (as any reasonable 3D software should do 😉 and Virtools uses a screen based (irk), left handed (irk!!!) coordinate system.

So after a small vector component shuffle, my two virtual hands began to move!

The latency is really low I’m really happy about that.
I’ll have to test the accuracy, but I really don’t have time right now.

The gloves seem to have been designed with children in mind.
It is stretchable so no problem to fit it to my hand. I’ll have to test it on friends with Canadian hands :p
After 10 mins of use, it starts to be a bit tight and I could feel the blood flowing more slowly,
especially in my little finger, where there’s a special strap.
There is also a small stich rubbing the thumbs.

All in all nothing really annoying, and it will easily for forgotten in the midst of action =)

So my first impression is really good! For the moment it’s up to my expectations: cheap, easy setup, easy to use, low lattency.
It will be more than enough for my needs right now. I’ll let you know when I have a bit more experience with it.

ps: I’ll be off a a couple of weeks, first to give a VRPack training in Belfast, then for a week of parachute/freefall at Bouloc. Be nice to each others 😉