A couple of months ago I had the opportunity to test the Virtusphere for two days and could since watch several beginners try this device.

The Virtusphere is a 2.6m sphere of 120kg made of ABS plastic, lying on wheels, with an incredibly sophisticated movement detection device below (a mouse!), used as a virtual reality locomotion device.

You enter the sphere by a small hatch, and are instructed to take small steps first. So a small step you make, and the sphere starts to roll, and you make another step to keep balance, and .. you’re walking! During the first session you might even be able to run, and a lot of people did! Especially girls who generally perform better than guys.

Ray Latypov, the inventor behind the Virtusphere along with his brother, started programming games 15 years ago in Russia. He made enough money out of his games to finance the first prototypes of the Virtusphere.

Ray Latypov and the Virtusphere

But why build a sphere?

“Once you know the task, walking, the device is easy to create!”, Ray says.

The Virtusphere doesn’t have any active part, there is no motor. The sphere movement only comes from the steps of the user. The sphere lies on wheels :

Ray says this is an advantage over the treadmills because the motors induce some latency.. This is a point I’d like to verify myself.

But this advantage has a drawback: as the sphere has a bit of inertia, you have to learn to start the movement correctly, and more importantly, learn of to stop the movement. This is not completely natural and induces instability that has to be managed by the user. This is particularly a problem for tall people ( >= 1.80m ) that are much less at ease.

Moreover, due to the size of the sphere, the walking area is not really planar; this forces you to slightly modify the way you walk. A bigger type of sphere with 3m diameter exists that would reduce this issue.

This inertia and the not so flat ground makes it an unnatural walking, this is why you may not want to use the sphere for studies on real-life walking. The CyberWalk project built an omni-directional treadmill to study the natural walking.

You would think that you’d get claustrophobic, but thanks to the design you can see outside quite well provided that the ball has a minimum speed. 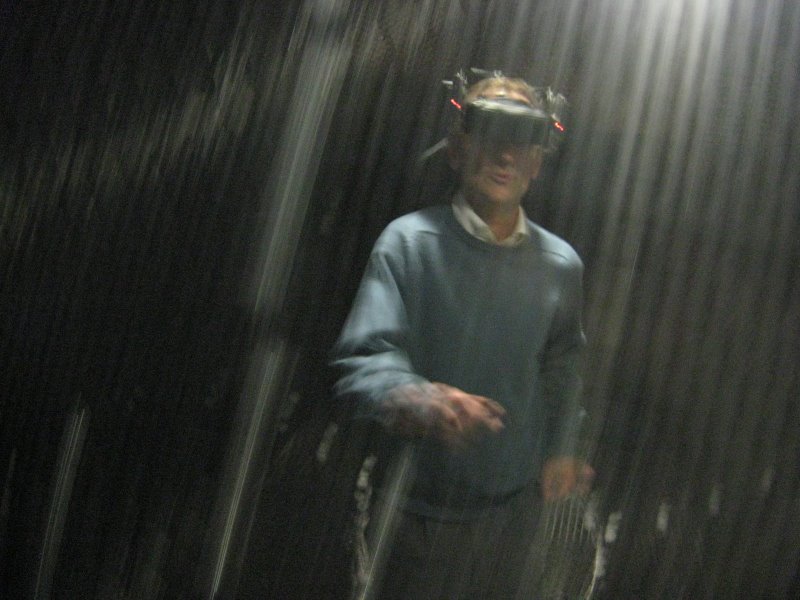 This is also an advantage when you wear and HMD. As the lateral vision plays an important role in balance, seeing the real world “horizon” helps a lot in staying on your feet. When you wear an HMD in the sphere your balance is affected, meaning you have more chances of falling. 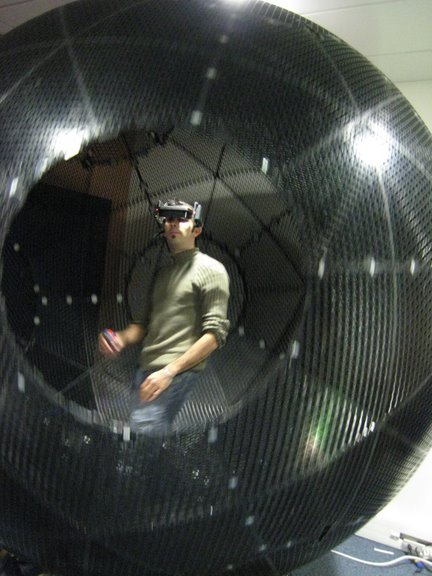 For the moment only the head orientation is tracked. We believe that tracking the head position (not just orientation) accurately will greatly improve balance.

By the end of the two days, we had a nice virtual environment running, and a stereo wall just next to the sphere displaying the view of the user.

It’s a fun locomotion device, that really catches the eye as a futuristic VR device. It may not be a natural walking, but the military are using it as a training device where the user can jump and roll, so choosing between this and an omni-directional treadmill (ODT) mainly depends on your application … and your budget; the Virtusphere is around 50’000$, whereas the ODT is 20 times more for now. 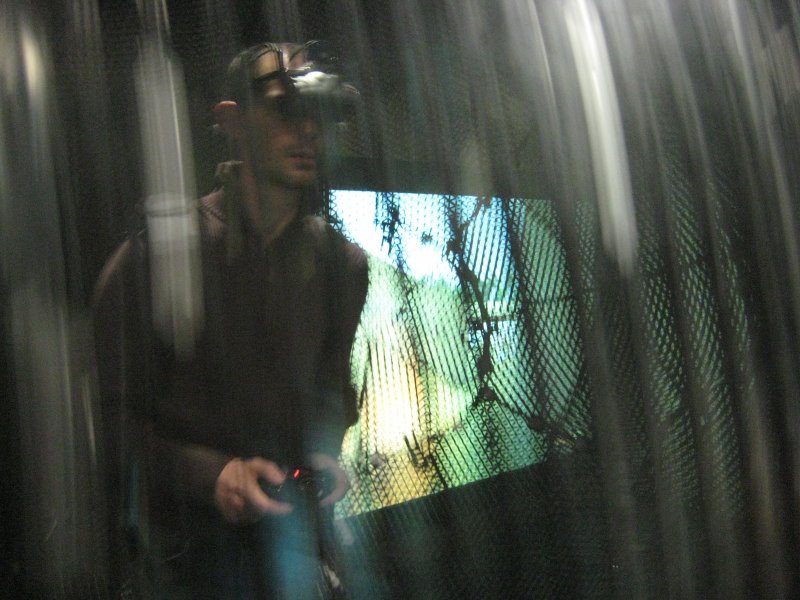